Located in Beppu, Japan is a popular area and well-known tourist attraction called “Jigoku Meguri.” The word “jigoku” takes its meaning, “burning hell,” from the ancient Buddhist sutras of the East. It is said that a visit to the eight phenomenal, natural hot spring sites will also conjure up images of the hellish depths of the “Inferno” as portrayed in the great medieval poem by Dante. In an atmosphere charged with magnificence, awe, and a hint of terror, one can marvel at and appreciate the power and beauty of nature. These hells are multicolored volcanic pits of boiling water and mud, and one geyser. The hells are too hot to be diluted into an onsen, as the temps range from 50 to 99.5 °C (122 to 210 °F)!! Some of the hells also have a natural smell of sulfur.

These hells are administered by The Beppu Jigoku Association and cost 2,000 yen/adult to view all eight hells, or 400 yen/adult for each individual hell. The “Jigoku Meguri” are open every day from 8am-5pm and take about two and a half hours at a leisurely pace to visit them all.

Our first visit to hell: Yama-Jigoku (Mountain Hell). A gust of steam clears to reveal prancing lions, bathing hippos, and curious chimpanzees. Taking its name from the mountain of mud formed over the years, this “jigoku” is also a mini zoo that everyone can enjoy. First, you must walk through the mini zoo in order to reach the first hell. 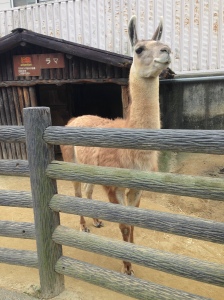 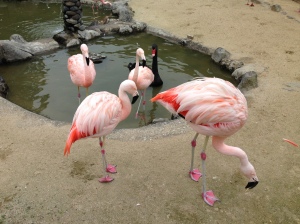 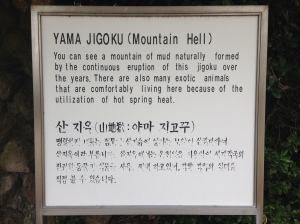 Our second visit to hell: Umi-Jigoku (Sea Hell). So called because it resembles the sea. This 200 meter deep, cobalt-blue pond of boiling water emerged 1,200 years ago after a volcanic eruption. The manicured gardens are simply magnificent. And from May to November you can marvel at the gigantic “Victoria Amazonica” lotus flowers grown in hot springs!

A smaller colored hot spring located at this site. 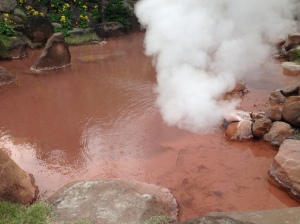 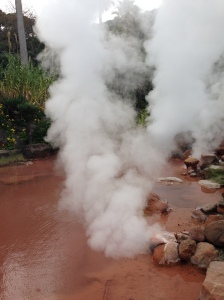 While experiencing Umi-Jigoku, we came across our first foot spa! 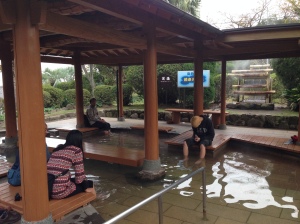 Onward to our third visit to hell: Oniishibozu-Jigoku (Shaven Monk’s Head Hell). This place is called Oniishi Bozu Jigoku (Oniishi Shaven Head Hell) after the name of the area, which is Oniishi, and because the large and small bubbles of hot grey mud that boil up here look like the shaven heads (bozu atama) of monks.

Reaching our fourth visit to hell: Kamado-Jigoku (Boiling/Oven Hell). A bright red demon stands on an enormous cooking pot as the mascot of this hot spring site, which is temptingly divided into six unique pots of murky, budding, “thumping” boiling waters. 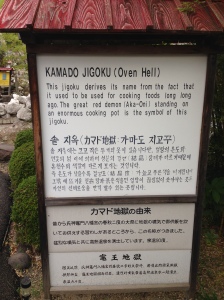 You can find hot spring boiled eggs- specialties of each jigoku- at all of the hells. Here we stopped to try some! 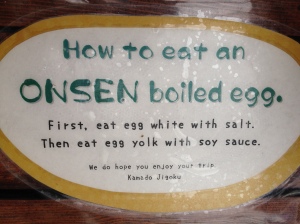 We also tried our second, and less scorching hot foot spa right next to the egg stand.

After some hot spring snacks and foot bathing, we set off for our fifth visit to hell: Oniyama-Jigoku (Demon Mountain Hell). The force of the steam produced at this spring can pull one and a half train cars. This “hellish” site is the happy home of a variety of crocodiles and alligators who slither down into the warm breeding waters. 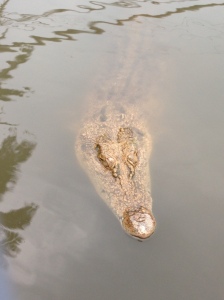 And our final and last trip to hell for the day, #6: Shiraike-Jigoku (White Pond Hell). The White Pond Hell is called so because the colorless water that naturally spouts from the ground mysteriously turns creamy white. The serene atmosphere of the traditional Japanese garden is very soothing and tranquil.

**On our trip to the hells, we spent so much time observing the hot springs and enjoying the shops, foot spas, and food, that we ran out of time to see the last two hells. Visions of Hell: part II will be posted when we have the chance to return to these boiling pits of hell and share our experience!**