Nagasaki’s Confucian Shrine (called Koshi-byo) rises like an exotic spectral island in the middle of a typical Japanese neighborhood. Walking up Hollander Slope, past a women’s college, through the old Western-style houses in Higashi-yamate, one can see the sharply curving roofs and brilliant colors of Chinese buildings as you look into the valley. Koshi-byo is the only Confucian shrine in the world built outside China by Chinese hands, and even today the land upon which it stands is Chinese territory and the land rights controlled by the Chinese embassy in Tokyo. It is a tiny, colorful oasis of Chinese culture and living evidence of the long and deep ties between China and Nagasaki. 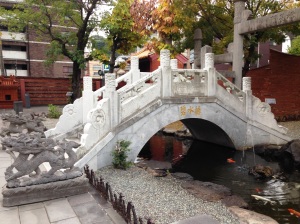 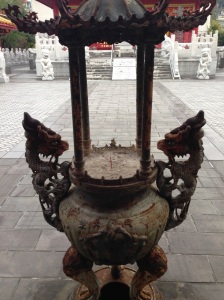 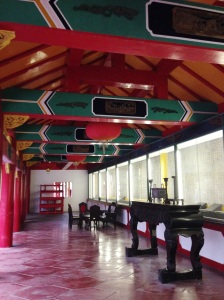 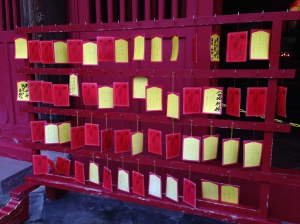 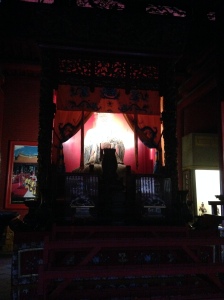 The History of Nagasaki’s Confucian Shrine:

First built in 1893 by Chinese residents of Nagasaki with the support of the Ch’ing Dynasty government, the shrine was designed to serve as a place of worship and learning for the Chinese community and housed a Confucian sanctuary and primary school. At the height of its prosperity the school had over 100 students, but it was moved to the second floor of a concrete building across the street when the shrine was reconstructed in 1982. Called Jichu Primary School, after graduation the pupils can enter local Japanese junior high schools freely because of the arrangement that has existed for decades with the Nagasaki prefectural government.

In the years after the initial construction in 1893, regular repairs and additions were made to the buildings, but they were severely damaged by the explosion of the atomic bomb on August 9, 1945 and were not restored and opened to the public until September 1967.

In 1982 the shrine complex underwent the most thoroughgoing facelift in its turbulent history. Although the original sanctuary building and the red brick wall surrounding the complex only needed cosmetic repairs, the spectacular front entrance building was completely rebuilt and a spacious ferro-concrete structure containing a Museum of Chinese History, conference rooms, and offices was constructed on the site of the former primary school.

Materials from China were used extensively: bright, yellow Beijing tiles and ornaments for the roofs, white marble statues, railings and flagstones, and even a new image of Confucius enshrined in the central sanctuary. Traditionally, the vivid yellow roof tiles are used only on the Emperor’s palace and Confucian Shrines.