February 3rd is the last day of winter according to the lunar calendar. It’s called “Setsubun” (Parting of the Seasons). In the evening of this day, a religious rite called “Mamemaki” (Bean Throwing) is observed in most Shinto shrines and Buddhist temples throughout the country. This was originally one of the Shinto rites, though in the past the rite was performed in the house.

The devils or goblins are “O-NE” in Japanese. “O-NE’s” appear in many Japanese folk tales and usually have one or two horns on their head, fangs, and wear only a tiger-skin loincloth. “O-NE’s” are actually symbolized figures that represent disasters, epidemics, or supernatural phenomenon that are beyond human control. On the day of “Setsubun” you will hear one cry “O-NE wa soto, Fuku wa uchi” (Go away evil spirits, Come in good fortune.”

For this ceremony, people such as sumo wrestlers, noted actors, and politicians are invited to scatter parched (or roasted) soybeans. Usually those who are born under the particular sign of the Zodiac for the year throw beans. These bean throwers are commonly called “Toshi-Otoko”  (Year Men) and “Toshi-On’na” (Year Women). Huge crowds gather to watch them perform the rite and try to catch beans. You have to eat as many beans as your age, plus one, to stay happy, healthy, and safe for a year! The extra bean is to cover this year because you get one year older sometime within the coming year.

People of the unlucky ages- 25 and 42 for men, 19 and 33 for women- will wrap beans that are in the same number of their age with coins in a white paper. This packet is thrown away at the crossroads so that evil spirits may be thrown away along with it. It’s believed to keep people from harm during their critical/unlucky year!

According to the priest at the temples and the shrines, anyone who wishes to throw beans can do it. Moreover, today’s “Setsubun” is not only a religious ceremony, but also observed more to amuse children. The bean throwers often mix candy with the beans and throw them for the benefit of children. People who are acting as “O-NE’s”  (Goblins) or “Fuku” (Happiness) wear the paper masks to disguise them. The “O-NE’s” are expected to leave the room when beans are thrown at them.

I had the awesome opportunity to visit the Miyajidake Shrine in Sasebo on February 3rd to observe a “Mamemaki” (bean throwing) rite and catch some beans. After the rite was performed, we toasted mochi (pounded rice cakes) on a bonfire, which we then put them into zenzai (sweet bean soup).

*The bonfire that we saw was the burning of ornaments from Japanese homes. Every year, for the first 7 days, the Japanese hang an ornament (looks like straw weaved together with a paper lightning bolt hanging from it) in their doorways. On this night, they take it down and bring this ornament to the festival to be burned. * 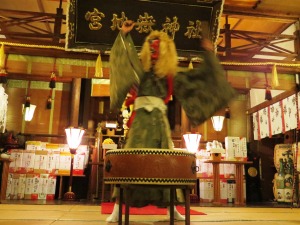 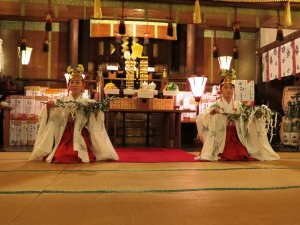 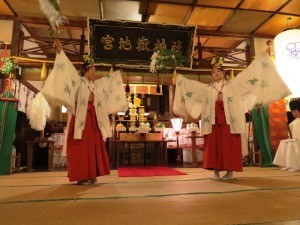 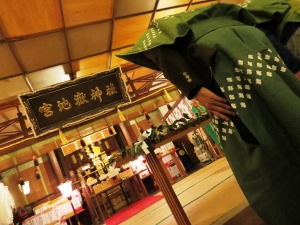 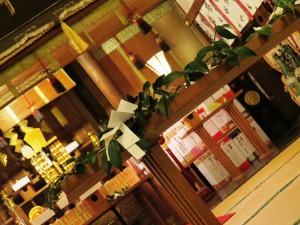 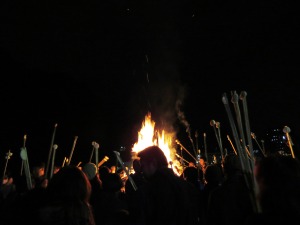 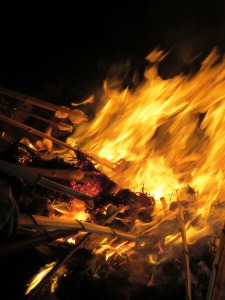