Location: Badaling Great Wall is situated in Yanqing County, over 70 kilometres (43 miles) north of Beijing. It is the most well-preserved section of the Great Wall, built during the Ming Dynasty (1368-1644). This section with an average altitude of over 1,000 meters (3,282 feet) is the outpost of the Juyongguan Pass. The mountain slope is very steep and the roads are tortuous. These features made it a military stronghold. The wall is like a strong dragon winding its way along the mountain ranges. 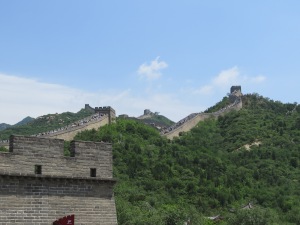 Function and Construction: The Great Wall originally functioned as a fortification. As early as the Qin Dynasty (221BC-206BC), Qinshihuang, the first emperor of Qin Dynasty unified the whole nation and began to build the wall to protect China’s borders from the intrusion of the northern nomadic tribes. Most parts of the preserved Badaling Great Wall were built and reinforced during the Ming Dynasty to defend the capital against the intrusion of these Mongolian people. The structure of the wall consists of huge bar-stones and bricks. The inside has been formed by tampering earth and small stones, which makes the wall very firm and strong. Internally, the wall is about six meters (20 feet) wide, which would allow horses to gallop five abreast. A number of small holes have been drilled on the wall to allow archers to shoot arrows. There is a barrel-drain and a moat both inside and outside the wall. In a word, military fortification has been paramount in the consideration of every wall detail.

The signal fire platforms were an important part of the whole fortification of ancient China. A signal fire platform is actually a blockhouse that was built on the top of the wall. It was used to send warning signals. Since the Ming Dynasty, the amount of smoke and gunfire released conveyed specific military information about the enemy. One release of smoke with one shot of gunfire signified 100 enemies; two smoke releases with two shots of gunfire meant 500 enemies; three smoke releases with three shots of gunfire indicated more than 1,000 enemies. Once one signal platform fired a beacon, the others would follow likewise so as to alert the command as to the strength of the enemy. 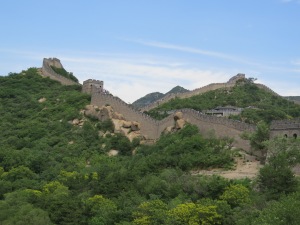 What is Jade? Jade culture is very rich in China. Chinese jade refers to the jade mined or carved in China from the Neolithic onward. It is the primary hard stone of Chinese sculpture. Although deep and bright green jadeite is better known in Europe, for most of China’s history, jade has come in a variety of colors. Jade objects include: small decorative and functional ornaments such as beads, pendants, and belt hooks; weapons and related equipment; and independent sculptures, especially of real and mythological animals.

We made a quick stop at the National Stone Place to watch how Jade was made and browse through the shop.

One piece of craftsmanship that we found particularly interesting was the Family Ball.

About the Family Ball:

Chinese arts and crafts have been known for centuries for their beauty, intricate details and mind-boggling craftsmanship. One of the epitomes of Chinese ornamental design is the Chinese puzzle ball (“Family Ball”), a sphere that is thought to have a strengthening influence on family unity. The balls come in many sizes and materials — most are handmade from wood, resin, ivory, soapstone or jade. The outermost sphere contains a number of smaller, freely moving balls, all enclosed one within another. Depending on the size of the object, the ornate sphere can generally be made up of 3 to 7 layers, or balls, to be more precise. The world’s biggest puzzle ball contains 42 layers!

A Unique Carving Technique:The balls are carved by turning a solid ball on a lathe. Holes are drilled towards the center and special L-shaped sharp tools are used to cut free the innermost balls. The tools are of different lengths and the one with the longest upright has the shortest cutter, and vice versa. The work starts off with the longest tool being lowered to the narrow bottom of each hole and rotated to cut the innermost ball free. The work progresses from the inside out. The two outermost balls are fused together to form a thicker layer so as to prevent breakage when the elaborate carvings of the outermost layer are made. What a terrible accident it would be if the last layer of the ball were to crack after all the work put into decorating the inner layers!

Symbolism: Two of the most common figures presented on the balls are the dragon and the phoenix, which correspond to our yin (female) and yang (male) characteristics. The dragon represents an emperor, or the husband, and the phoenix represents an empress or the wife. A puzzle ball decorated with these figures symbolizes a happy marriage blessed with success and prosperity. According to the principles of feng shui, in order to best profit from the positive influence of the ball, it should be placed on the southwestern side of your bedroom or living room.

About: 50 kilometers (31 miles) northwest from Beijing City, at the foot of Tianshou Mountain, is the Ming Tombs Scenic Area, where lie the mausoleums of thirteen emperors of the Ming Dynasty (1368 – 1644). Since 1409 when Zhu Di, the first emperor of the Ming Dynasty, built his Changling Tomb here, the succeeding twelve emperors had their tombs built around Changling during the next 230 years, covering a total area of over 120 square kilometers (46.3 square miles). This is the best preserved tomb area with the most emperors buried.

In the scenic area, each mausoleum has its own independent unit. The layout and arrangement of all the thirteen mausoleums are very similar, but they vary in size as well as in the complexity of their structures. Each of the tombs was built in an area at the foot of the mountain, with distances ranging from half a kilometer (547 yards) to eight kilometer (8,749 yards) between them. The other tombs stretch out on the two sides of Changling Tomb in a fan shape, except for the Siling Tomb, which sits separately in the southwest corner. From site selection to design, great attention was paid to the harmony and unity with nature, pursuing a perfect situation of ‘made by God’ and reflecting the philosophy ‘the unity of heaven and humanity’.

Dingling Tomb:Located at the eastern foot of the Dayu Mountains, Dingling Tomb is the joint burial tomb of the 13th Ming emperor Zhu Yijun (1563 – 1620) of the Ming Dynasty (1368 – 1644) and his two empresses, Empress Xiaoduan and Empress Xiaojing. Zhu Yijun ascended the throne at the age of 10 and occupied the throne for 48 years, the longest among all of the emperors of the Ming Dynasty. Built over six years between 1584 and 1590, the tomb covers an area of 180,000 square meters (44 acres).

The Above Part of Dingling Tomb.

National treasures found at this tomb:

The Underground Palace of Dingling:  The only one of the Ming Tombs excavated so far. With a total floor space of 1,195 sq. meters, it is composed of five stone chambers: the front chamber, the middle chamber, the rear chamber, and the left and right annex chambers. More than 3,000 pieces of cultural relics were unearthed from Dingling.

Rear Hall: The main hall of the Underground Palace that houses the coffins of the emperor and empresses. 26 nanmu cases are scattered around the coffins. When the Palace was opened, empress Xiaojing’s coffin and the majority of the funerary objects had already decayed. The ones displayed are reproductions.

Sacred Way to the Ming Tombs.

In the front part of the imperial burial grounds for the Ming Tombs, there is a Sacred Way (or Divine Road) which means the road leading to heaven. The Emperor, known as the Son of Heaven, who came from Heaven to his country through the Sacred Way, also would return to Heaven through this road. Along the Way, you will see a great number of sights of interest and beauty, including the Stele/Tablet Pavilion, Ornamental Columns, and stone figures.

North of the main gate is the Sehngong Shengde Stele Pavilion. Inside it, there lies a 50-ton tortoise carrying a stone tablet. This tablet, or stele, has the engraved characters, “Stele of Divine Merit and Sacred Virtue, Changling, Great Ming.” According to Chinese legend, this marble tortoise is the Son of Dragon, which the emperor called himself.

A white marble Huabiao (ornamental pillar) is positioned at each corner of the stele pavilion. At the top of each is stationed a mythical beast facing either inward or outward, expressing hope that the emperor will neither cling to the palace, nor forget to return to the palace to handle state affairs.

Going inward from the stele pavilion, is the Sacred Way. The Sacred Way starts with two hexagonal columns called Wang Zhu on either side of the road. They are carved with a cloud design and their tops are shaped liked cylinder.

The road is lined with 18 pairs of marble figures lined up opposite of each other. These figures include 6 pairs of human beings (including the general, civil officials, and meritorious officials), and 12 pairs of animals such as the lion, camel, elephant, xiezhi (mythological unicorn), qilin (one of the four divine animals- the others are dragon, pheonix, and tortoise), and horse. Lion symbolizes awesome solemnity because of their ferocity. Camel and elephant are meant to suggest the vastness of the territory controlled by the court because they are dependable transportation in desert and tropic locations. Xiezhi was put there to keep evil spirits away because it was believed to possess the sixth sense to tell right and wrong. If two men fight, a xiezhi would gore the wicked one. Qilin, an auspicious symbol, was placed on two sides. Horse, as the emperor’s mount, is indispensable. It is said that these animals are supposed to change guard at midnight. The tradition of setting up marble statues as guards of honor in front of the mausoleum began in the Han Dynasty. It signified the royal dignity of the emperor while attempting to bring good fortune and ward off evil influences. 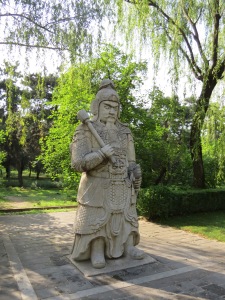 The avenue of stone animals and statues ends at Ling Xing Gate, better known as the Dragon and Phoenix Gate. However, the Sacred Way goes beyond the gate towards the chief tomb-Changling, emperor Yongle’s tomb.

Known as the Bird’s Nest, this building was designed as the main stadium of the 2008 Beijing Olympic Games. The Olympic events of track and field, football, gavelock, weight throw, and discus were held there. Since October 2008, after the Olympics ended, it has been opened as a tourist attraction. Now it’s the center of international or domestic sports competition and recreation activities.

The gross cost of the whole project was about 33 million dollars, covering an area of about 258 thousand square meters, and accomodating 80,000 fixed seats and 11,000 temporary seats. The form of the stadium looks like a big nest which embraces and nurses human beings. In it, the designs of everything are humanistic. The bowl-like stands zone surrounds the court. The stands can be changed in many ways, satisfying the needs of different numbers of spectators in different periods. No matter where a spectator is seated, the whole game can be seen without any visual obstruction.