Before we headed off for Xi’an, we took on a smaller Beijing area old-school style, enjoying a Hutong tour by rickshaw!

During this rickshaw tour, we were also able to walk around the side streets as well, visiting the bell and drum tower, and getting a walkthrough of a local Chinese home.

Bell and Drum Tower: They were originally used as musical instruments in China. Afterward, however, they were used for telling time. As early as in the Han Dynasty (206 BC-220), there was ‘a morning bell and a dusk drum’. Telling the time by them played an important role in helping people live and work regularly when there was no other means to keep track of the time. As a result, they became public architectures, and were widely constructed in almost every city throughout the country since the Han Dynasty. In the history of their construction, they are the largest and highest. Their layout is unique, in that they were placed fore-and-aft, not as the traditional sense of standing right-and-left horizontally.

Chinese Home Tour: This was a neat opportunity to be welcomed into a local Chinese home for a tour. This owner, in particular, opens up his home to foreigners, so that they can learn more about the heritage and culture of China. There is an outdoor communal section in the middle of the home. It is also here, that the owner grows apricots and grapes. Surrounding the communal section, there are four parts to the home: north, south, east, and west. Each part divides up into the living quarters, kitchen, and work office space. A total of 7 people share this space! This family is very fortunate from others, as they have been able to keep it in the family and it is 100 years old! The eldest man’s profession is paper-cutting (and calligraphy), and everyone in the family follows the same profession. It is not common to be a paper-cutter.

The Terracotta Warriors are considered remarkable and one of the greatest finds of the twentieth century. However, before we could witness these breathtaking sculptures, we began our time in Xi’an making a quick stop at a pottery-making factory. It was here that we learned how sculptors recreate replicas, small and life-size, of the famous Terracotta Warriors and Horses.

The Terracotta Army Museum lies less than 2 km east of The Tomb of Qin Shi Huang, known as the First Emperor, who unified China 2,200 years ago. Emperor Qin, from whom China gets its name, ordered the creation of this model army.It had lain underground for more than 2,000 years before farmers digging a well in 1974 uncovered what is now considered one of the greatest archaeological sites in the world.

Why were the Terracotta Warriors made?

The army of terracotta statues was made to be buried with First Emperor of China, Qin Shi Huang: 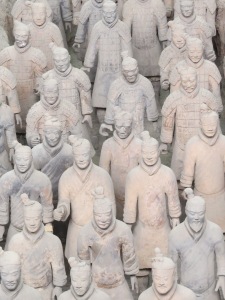 Thousands of life-size, vivid terracotta warriors in battle formation were revealed in the course of excavation of the earth and timber vaults – a whole army which would accompany its emperor into immortality. The horsemen, the longbow bearers, the archers, and the senior officers and generals were positioned in a grand ancient army formation, in strict accordance with the ancient directives on the Art of War.

Every figure differs in facial features and expression, clothing, hairstyle, and gestures, providing abundant and detailed artifacts for the study of the military, cultural, and economic history of that period. Many of the figures originally held real weapons of the time, such as bronze swords, longbows, arrows, spears, dagger-axes, and other long-shafted weapons. The weapons were treated to make them resistant to rust and corrosion, so that even after being buried for over 2,000 years they were still sharp.

The Exhibition of Bronze Chariots

The two bronze carriages displayed in the hall were discovered 20 meters from the west side of the Tomb of Qin Shihuang in December 1980, and were elaborately restored before exhibition.

They were mainly made of bronze, but there were 1,720 pieces of golden and silver ornaments, weighting 7 kg, on each carriage. The carriages were so well-made, and so vivid, that they boast being the best-preserved and having the highest rank among the earliest known bronze relics in China. These chariots are the biggest pieces of ancient bronze ware ever found in the world.

With the bronze wares, pottery figures, and mural paintings in Tang tombs as its distinctive collections, it boasts 370,000 pieces of cultural relics unearthed in Shaanxi Province. The exhibition is divided into 7 parts: Prehistoric, Zhou Dynasty, Qin Dynasty, Han Dynasty, the Wei, Jin, Northern and Southern Dynasties, the Sui and Tang Dynasties, and the dynasties after Tang.

The kettle below is considered a “Magic Pot.” There is no opening at the top for water, as the lid and body are connected. The loop handle is in the shape of a phoenix and spout as a lion. Its belly is carved with four entertwining peony flowers in blossom. The pot is placed upside down when pouring in water, which flows in from a plum-shaped hole at the bottom. The pot is filled up when water spills from the spout. When the pot is upright, the pouring-in tube holds the water so that the bottom hole doesn’t leak!

History: When Zhu Yuanzhang, the first Emperor of the Ming Dynasty (1368-1644), captured Huizhou, a hermit named Zhu Sheng admonished him that he should ‘built high walls, store abundant food supplies and take time to be an Emperor,’ so that he could fortify the city and unify the other states. After the establishment of the Ming dynasty, Zhu Yuanzhang followed his advice and began to enlarge the wall built initially during the old Tang Dynasty (618 – 907), creating the modern Xian City Wall. It’s the most complete city wall that has survived in China, as well being one of the largest ancient military defensive systems in the world.

Structure: After the extension, the wall now stands 12 meters (40 feet) tall, 12-14 meters (40-46 feet) wide at the top and 15-18 meters (50-60 feet) thick at the bottom. It covers 13.7 kilometers (8.5 miles) in length with a deep moat surrounding it. Every 120 meters, there is a rampart which extends out from the main wall. Altogether, there are 98 ramparts, which were built to defend against the enemy climbing up. Each rampart has a sentry building, in which the soldiers could protect the entire wall without exposing themselves to the enemy. Besides, the distance between every two ramparts is just within the range of an arrow shot from either side, so that they could shoot the enemy, who wanted to attack the city, from the side. On the outer side of the city wall, there are 5,948 crenellations, namely battlements. The soldiers can outlook and shoot at the enemy. On the inner side, parapets were built to protect the soldiers from falling off. Since the ancient weapons did not have the power to break through a wall, the only way for an enemy to enter the city was by attacking the gate of the city wall. This is why complicated gate structures were built within the wall.