On our last day in Xi’an, we steered off course from some of the more famous and well-known attractions to experience more of the local aspects of living in China. We visited the Small Wild Goose Pagoda, and inside, took part in learning the basics of Chinese calligraphy at a small calligraphy school and even tried out our talents with the brush! Later, we had a local family visit who cooked us authentic home-made Chinese dishes. In the afternoon, we said good-bye to Xi’an and grabbed a flight to Shanghai, where we spent our last and final day in China before coming home to Japan.

Structure: This multi-eave brick pagoda is thirteen stories tall, reaching 43.38 meters (142 feet). It is square on plane and rises skyward in an elegant spindle shape. Above the ground floor, the height of each storey diminishes, rendering a graceful curve to the contour. Multi-eaves are made by overlapping bricks which curve inward, a characteristic of the Tang Dynasty construction. The ground floor has arched doors facing north and south; the other floors have arched windows instead. 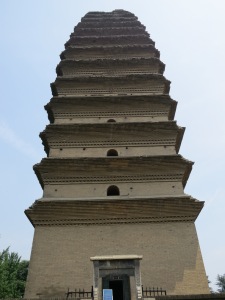 Because Xian is located in an area where earthquakes sometimes occur, the pagoda base is made from packed earth in the shape of a hemisphere. In case of an earthquake, the pressure can be evenly divided, thus the pagoda has remained standing after over seventy earthquakes. After so many earthquakes, only the pinnacle and the two upper floors (the original pagoda had fifteen stories) have been damaged. Remarkably, cracks which occurred during earthquakes have been closed by quakes that came later.

“Magic Bell:” A giant iron bell 3.5 meters (11.4 feet) in height and about 10 tons in weight resides in the Jianfu Temple. It makes a magnificent clear sound that can be heard more than three miles away. It is said that if one missed his beloved relations far away from him, the only thing he could do was to strike the bell and the sound of the bell would pass the message to him. The elegant pagoda along with the bell is known as ‘The Morning Bell Chimes of the Pagoda’ and is considered one of the eight major cultural sites in the province.

Studio of Chinese Calligraphy and Painting.

Learning Chinese is very tricky and different from English but a great experience! We learned that there are four staples of Chinese calligraphy: brush, ink stone, ink, and rice paper. There are a few major differences to think about when learning basic Chinese. For instance, the English alphabet has 26 characters but the Chinese language has 214 radicals (Chinese characters) that have to be memorized! In addition, the Chinese have 4 different tones to their language. If you say it different, it means something different. The Chinese write left to right and from top to bottom. One tricky thing about calligraphy is that the writer must always hold the brush in a vertical line- straight up and down- no slanting like you might with pencil. A complete work of calligraphy will have the artist’s name written vertically down the paper, as well as a personal stamp. 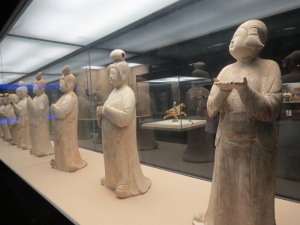