Said to be one of the biggest tourist traps in Thailand, the Golden Triangle refers to the border regions between Thailand, Burma, and Laos. Within Southeast Asia the term is synonymous with the opium and heroin trade. I think the subject of opium and heroin in tourists minds create an illusion that this area will be remote, perhaps with a few rural villages whose people can be seen using this stimulant in their everyday lives. Or perhaps even have the hope of seeing some drug wars take place. Okay, so maybe not to that extent… In reality, the Golden Triangle is really just a tiny piece of Thailand full of shops, restaurants, and hotels with prime views of the waters that run along the three border regions. However, there are very interesting pieces of history that can be learned at the Golden Triangle.

about the golden triangle

The history of the opium poppy in the Golden Triangle can be traced back to various Chinese migrant groups for whom the poppy was an integral part of their cultural traditions. Elderly people regarded opium, and still do, as an acceptable natural stimulant. Tribes have always produced opium for trade, intended first for the Chinese market, but later the French colonists brought large amounts during their reign in Indochina.

After Mao Zedong’s Communist Army defeated and ousted Chiang Kai-Sheks National Revolutionary Army, many of these Chinese Kuomintangs came to the Thai-Burmese border region looking for ways to make money. They decided to make their living in the drug trade and dramatically increased production. Southeast Asia’s role in the production of opium sharply increased when poppy field plantations in Iran and China were prohibited in the 1950’s. The Golden Triangle became renown for opium and heroin production during the Vietnam War. On one hand there was a huge, ever increasing market for narcotics while on the the other hand, money from the drug trade was used by the CIA to fund allied armies secret missions and secret wars in Laos.

The governments in the “Golden Triangle” have dealt with the problem of poppy production with differing levels of intensity. In Thailand, the cultivation of poppies is illegal and in the Northern provinces it seems they have been very effective in limiting cultivation. Northern Thailand has many new roads and airports which make it easier for the police and military to control and patrol the region effectively. 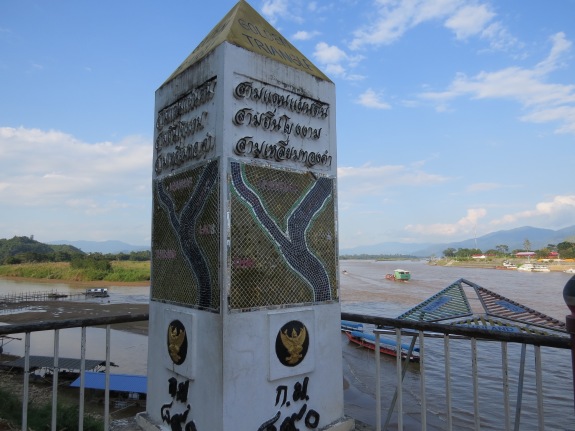 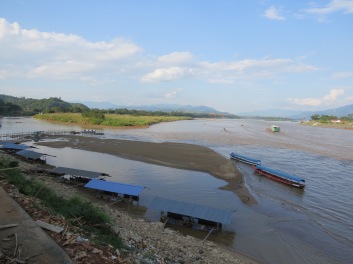 The 212 House of Opium is a small museum with historical displays pertaining to opium culture that is worth a peek. Exhibits include all the various implements in the planting, harvest, use and trade of opium, including pipes, weights, scales, and so on.

a history of opium

Although it is known that opium originated in the Mediterranean area, who discovered it is still unknown. However, some evidence in archaeology and literature indicates that people in Greece, Rome, Persia, and Egypt called the plant “opium” (meaning “fruit juice”) and learned to use it as a narcotic and a medicine as early as 1000 B.C. For example, 3,000 year-old ivory opium pipes were found in Cyprus. Some Greek epics (Illiad, Odyssey and prayers to the Greek goddess, Demeter), mention the medicinal qualities of opium. Also, in his book of medicine, Hippocrates, the Greek physician who is considered the father of medicine, recognized the use of opium as an effective drug for the treatment of various diseases.

It is believed that in about 356-323 B.C., Alexander the Great took opium to China and India. Monopolizing opium trade in China, Britain not only gained immense profits but also created conflicts with China. Eventually these conflicts brought about the Opium War between the two countries, which China lost. Later, during the 19th century and the start of the 20th, several hill tribes brought opium with them as they moved down from China through mountainous areas along the Thai, Laos, and Myanmar borders. This is how opium came and prospered in the Golden Triangle. 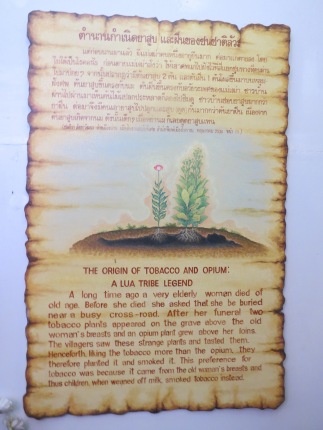 “Heel Against Buttocks:” The greatest position for smoking opium among all the hill tribes in Thailand. It is believed that kneeling down with the heel pushed against the buttocks is the most satisfying position for opium smokers. 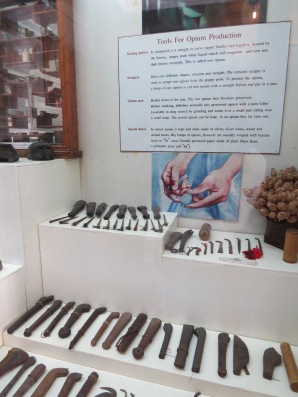 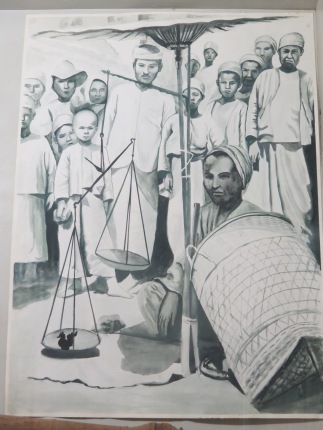 Opium Weights: Normally made of bronze and brass, opium measuring weights are popularly made in different animal motifs- swans, ducks, lions, elephants, Karaweks (a kind of bird), turtles, fish, and the 12 animals representing the 12 year cycle. Other designs found include cylinders and alms bowl of Buddhist monk.

Mythical Origin of the Chinese Opium Pipe: It is said that a red-faced god with six arms appeared before the great yellow emperor (Huang Ti) one day and blew a mighty breath across the earth, magically producing a bamboo pipe. With another divine puff he created the poppy, and with a third puff a flame appeared, thereby engendering the three most essential elements for smoking opium: pipe, lamp, and opium. 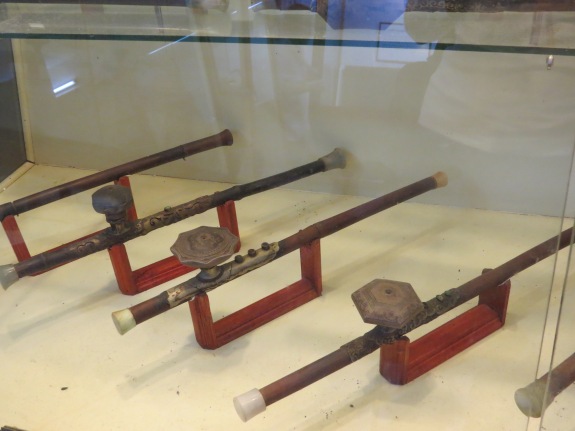 Opium Pillows: Since smokers recline on their sides when preparing and smoking opium, a hard thick pillow, about 15cm (6in.) high is provided to rest the head. Opium pillows are usually fashioned from hard leather, wood, or brightly enameled porcelain. Porcelain pillows keep smokers head firmly soft and comfortably cool, and although they are very hard, after smoking a few pipes of opium, the smoker feels as though his head were resting on a cloud.

Chinese Opium Mats: When smoking on the floor, a mat of polished bamboo slats was used. These mats were cleverly designed to allow air to circulate beneath the smoker’s body in order to help keep him or her cool and comfortable while smoking.

CROSSING OVER TO LAOS

Amongst the craziness of the Golden Triangle, there is an area where you can travel across the river to the neighboring border of Laos! Just fill out some forms, pay, and then you are sped across the river to spend a couple of hours in Laos. (Note: You have to leave your passport with the Thai’s but you can get it back upon your return. They do keep them locked in a safe).

So we hopped on a tiny boat and bounced our way across the murky Mekong to step foot onto Laos. There isn’t much to see in this particular area along the river. It mainly consists of a small market area selling liquor and clothes. Although we didn’t get to really explore this country fully, it’s still neat to say that we’ve been to Laos 😉 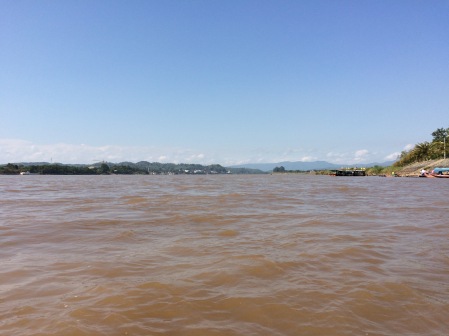