Unfortunately, we only stopped through for a day excursion in Phnom Penh before leaving Cambodia. Even though we were only there for a brief time, I still felt that I couldn’t not blog about our experience in Cambodia’s capitol! This city shared some amazing history, culture, and cuisine with us and we didn’t even see the half of it! It was worth it to just swing by 😉

Gleaming in gold with protruding pointy rooftops, the Royal Palace of Phnom Penh displays spectacular architecture and beautiful grounds! It is home to His and Her Majesty of Cambodia, built in 1866 by King Norodom (great grandfather to the current king). 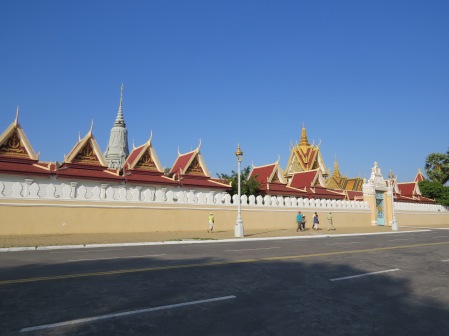 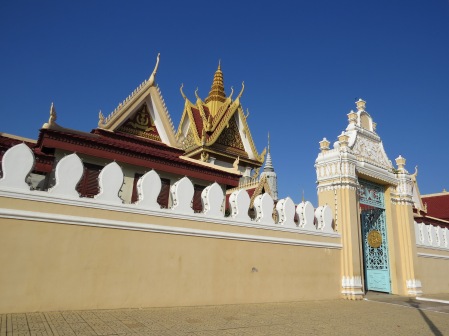 Entrance to the Royal Palace. 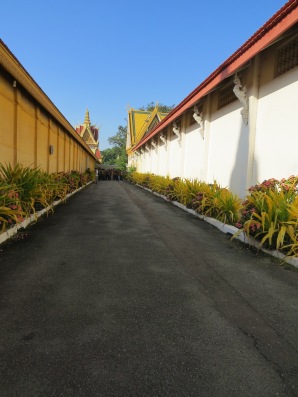 Neighboring the Royal Palace sits the Silver Pagoda, or Wat Preah Keo Morokat, which means “Temple of the Emerald Buddha.” The pagoda compound as a whole contains several structures and gardens, including a library, various stupas, shrines, monuments, and the galleries of Reamker.

It is known as the ‘Silver Pagoda’ for the 5,329 silver tiles that cover the entire floor! Each tile was handcrafted and weighs 1.125kg. The pagoda serves less as a functioning temple than a repository for cultural and religious treasures, containing over 1,650 precious objects! The primary Buddha, sitting on a gilded dais above all others in the temple, is the Emerald Buddha, reported to be made of emerald or baccarat crystal. In front of the Emerald Buddha stands Buddha Maitreya (Buddha of the Future), a 90kg golden standing Buddha encrusted with 2,086 diamonds including a 25 caret diamond in the crown and a 20 caret diamond embedded in the chest! Other objects include a Buddha relic from Sri Lanka in a small gold and silver stupa, a collection of gifts from Queen Kossomak Nearyrith, and contributions and gifts from other nobles and Royals.

However, photos are strictly forbidden inside so I am unable to share that part of our exploration with you. You will just have to believe me when I say that with all those real jewels and treasures filling the inside, it’s incredible to view!! 🙂

This pagoda is where the King meets with monks to listen to their sermons and where some Royal ceremonies are performed. And, unlike most pagodas, no monks live at this pagoda. 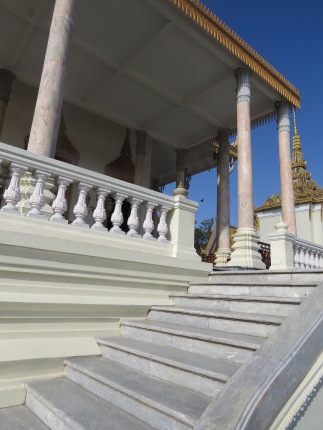 The pagoda steps are crafted from Italian marble!

The stupas placed around the grounds of the Silver Pagoda are memorials to members of the royal family. One of them contains the ashes of King Norodom (1834-1904), and was constructed in 1908. Placed between two stupas in the front area of the pagoda is an equestrian statue of King Norodom. Completed by french artist Eude in 1975 in Paris, it was placed on the grounds in 1892. The canopy was added by King Sihanouk in 1953 to honor King Norodom in light of Cambodia’s new independence.

The interior of the pagoda compound walls is covered with murals depicting stories from the Reamker, i.e. the Khmer version of the classic Indian epic, the Ramayana. Some sections of the murals are deteriorated and weather damaged. Many parts are undergoing restoration now. The murals were painted in 1903-1904 by a team of students working under the direction of artist Vichitre Chea and architect Oknha Tep Nimit Thneak.

Renovations on different sections of the damaged/weathered parts. 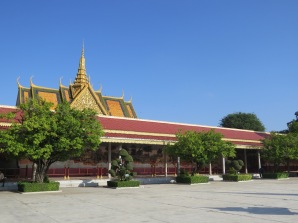 Compound walls lined with murals from a distance.

After you have visited the compound of the Silver Pagoda, you pass by a series of exhibition halls on your way to the exit. There are various carriages, traditional Khmer folk dance costumes and masks, silverware, etc. 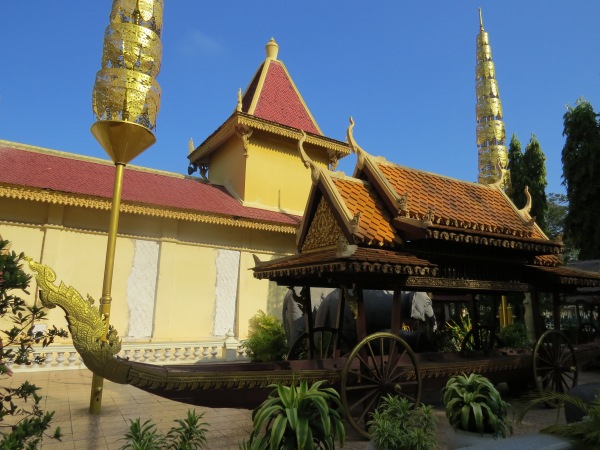 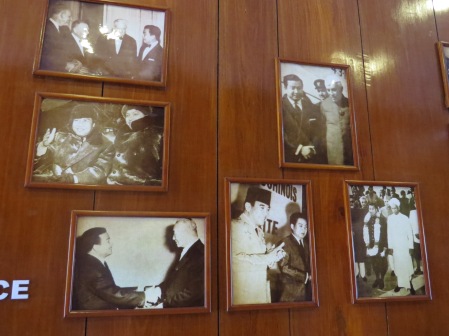 The National Museum of Cambodia houses one of the world’s greatest collections of Khmer cultural material including sculpture, ceramics, and ethnographic objects from the prehistoric, pre-Angkorian, Angkorian, and post-Angkorian periods. Beautiful traditional Khmer architecture make up this museum that houses over 1,800 works of art on display with an open-air layout. Photos are prohibited inside and of the art pieces, however, it is okay to take pictures in the inner central garden area. 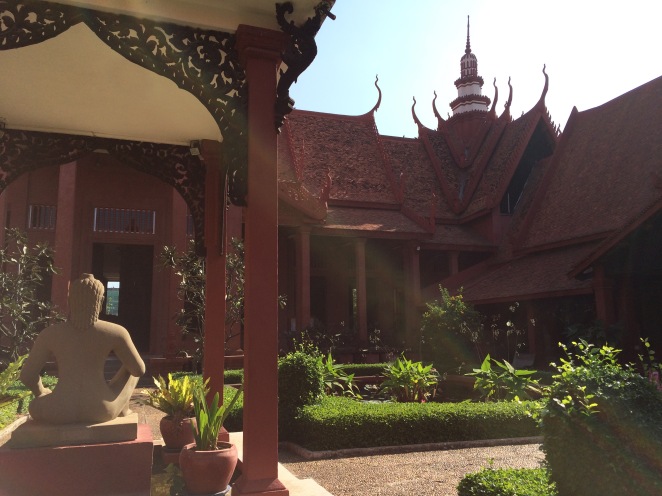 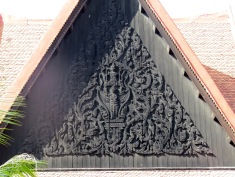 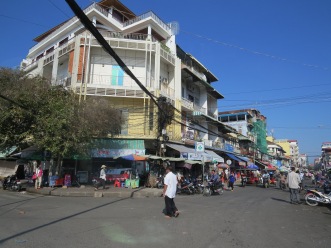 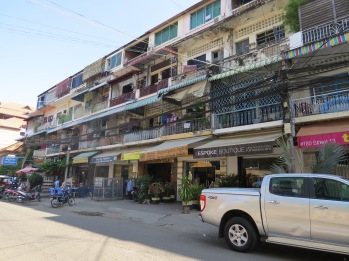 Creative use for unwanted barrels! 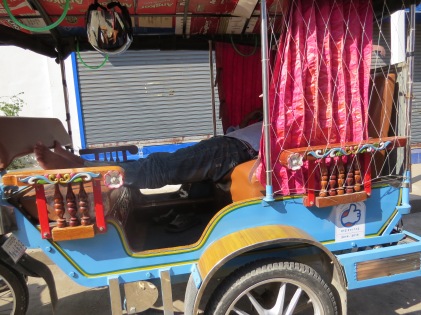 Afternoon nap in his rickshaw.

Set on top of a tree-covered knoll 27m high, Wat Phnom is the only hill in town! According to legend, the first pagoda on this site was erected in 1373 to house four statues of Buddha deposited here by the waters of the Mekong and discovered by a woman named, Penh.

The main entrance to Wat Phnom is via the grand eastern staircase, which is guarded by lions and naga (snake) balustrades. Today, many people come here to pray for good luck and success in school exams or business affairs. When a petitioner’s wish is granted, he or she returns to make the offering (such as a garland of jasmine flowers or bananas, of which the spirits are said to be especially fond) promised when the request was made. 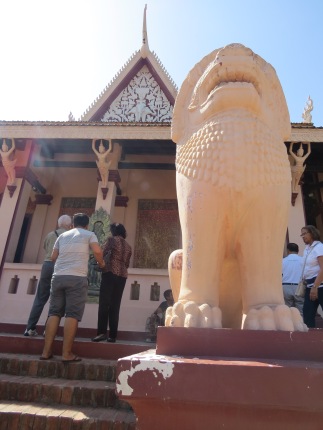 Bats in the surrounding trees! 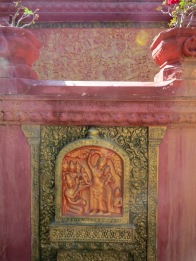 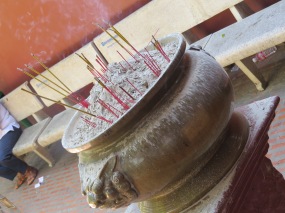 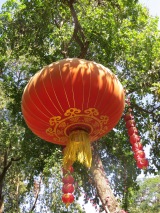 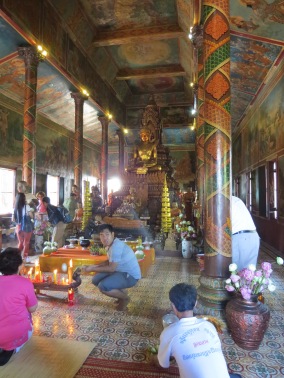 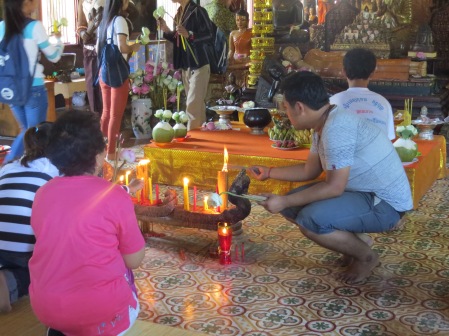 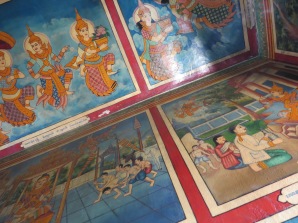 Smaller shrines in the surrounding outside area.

Below his stupa is a working clock, whose face is formed out of shrubbery. 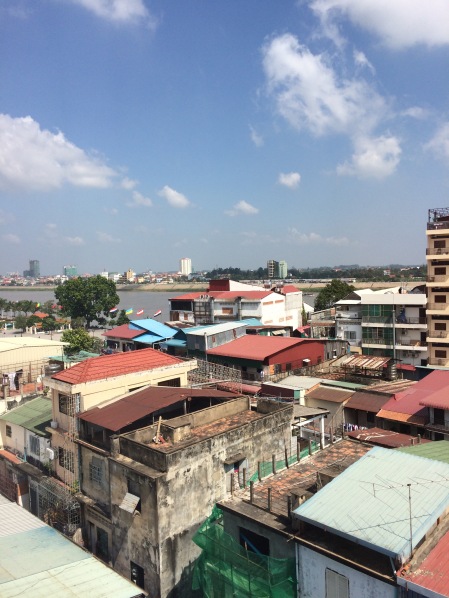