About: Situated in the northwest suburb of Beijing City, the Summer Palace occupies and area of about 742 acres. Composed mainly of Longevity Hill and Kunming Lake, it is the largest and most well-preserved royal park in China. It greatly influences Chinese horticulture and landscape with its famous natural views and cultural interests. There are over 3,000 man-made ancient structures which count building space of more than 70,000 square meters, including pavilions, towers, bridges, corridors, etc. It can be divided into four parts: the Court Area, Front Hill Area, Rear Hill Area and Lake Area.

Construction: Originally named Garden of Clear Ripples, it was built by Emperor Qianlong in 1750 to celebrate his mother’s birthday. It was later used as a pleasures garden for emperors and empresses. However, like most of the gardens of Beijing, it could not elude the rampages of the Anglo-French Allied Force and was destroyed by fire in 1860. It was also recorded that Empress Dowager Cixi embezzled navy funds to reconstruct the palace as a resort in which to spend the rest of her life in 1886. In 1900, the Summer Palace suffered another hit by the Eight-Power Allied Force and was repaired in the next two years. In 1924, it was formally opened to the public.

The Court Area. It is located in the northeast of the Summer Palace, spreading from the East Palace Gate to the northeast coast of Kunming Lake. This was a substitute where Empress Dowager Cixi and Emperor Guangxu met officials and conducted state affairs. With the same pattern of the imperial palace of China, ‘Palace in front and garden behind’, the Court Area consists of sections for both court affairs and living.

Empress Longyu, the niece of Empress Dowager Cixi and the wife of Emperor Guangxu, was the last empress of the Qing Dynasty. Although she was rather homely, Cixi arranged a marriage for her with Emperor Guangxu. However, they didn’t get along well with each other. She was not favored by Emperor Guangxu, and lived alone in Yiyun House. She usually accompanied Cixi and live freely even during the captivity of Guangxu. In 1908, Cixi and Guangxu died of ill health. Longyu was elevated to Empress Dowager after the succession of 3-year-old Puyi to the throne, although she was not Puyi’s birth mother. At the end of the Revolution in 1911, she released the abdication script, ending over 200 years of Qing Empire and 2,000 years of Chinese feudalism. Two years later, Longyu died at an age of forty-six.

Front Hill Area. This is the most magnificent area with the most constructions. It is symmetrically laid out in east and west many delicate buildings and graceful gardens with the south-facing Tower of Buddhist Incense as the central axis. 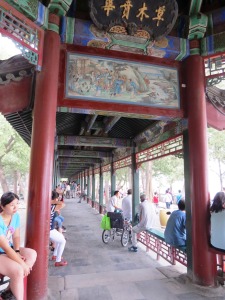 Design: Inlaid with colorful glass windows and wheels and paved with colored bricks, the boat is 36 meters long, and two stories and eight meters high. Using the huge mirrors fixed on each deck, Cixi could enjoy the exquisite lake scene while having tea. The roof of the two-decked pavilion is made from brick carvings. Four dragon heads mounted in each direction serve as drains, allowing rain water to be channeled out of their mouths. With its arcing stern and bow and a hull shaped like paddle wheels, the big boat looks very much like a steamer ready for sailing. A thick layer of moss covers the outside of the boat revealing its long tenure here.

In the evening, we caught “The Legend of KungFu” show at the Red Theatre. The show started in an ancient temple where we encountered a little boy that becomes initiated into the monastery and given the name Chun Yi (the pure one). The little monk studies Zen and Kungfu very hard. Years go by and the boy becomes a man. After many years of hard training, Chun Yi’s body turns to iron. However, things later go awry when Chun Yi chases a beautiful fairy that he creates in his mind, and hence cannot continue with his Buddhist practices. The monk Chun Yi loses his way of Buddhist practices and suffers from great remorse. Passing through the temple gate is a glorious ritual for a monk and, later, Chun Yi must accomplish this task to become a warrior monk. In the end, the old master passes on the stave and Chun Yi becomes the Abbot. Through practicing Kungfu and Zen, the once little monk, becomes a master and finally reaches the sacred goal of enlightenment.